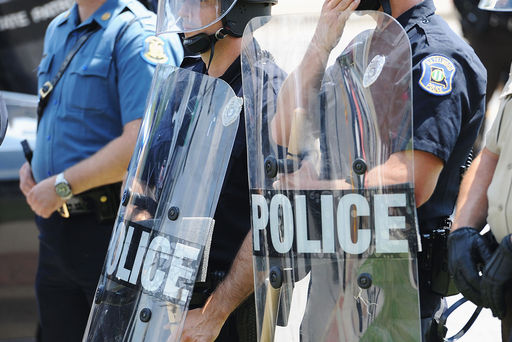 The recent Police shooting of 18-year-old Micheal Brown has sparked a lot of outrage not only in the town of Ferguson Missouri but all over the world. Since the shooting on Saturday, several peaceful protests have been held in Ferguson. Some of those protests have turned out violent with Police arresting citizens and dispersing tear gas into the crowd.  Images from the protests look nothing short of a war zone.

Two reporters, Ryan J. Reilly of Huffington Post and Wesley Lowery, a reporter for The Washington Post were arrested and later released for being at a McDonalds.  This kind of just makes you wonder if the Police department out there are not just used to bullying and getting away with it.  It is obvious the people of Ferguson have had enough. Lowery tweeted that he was assaulted by Police for asking a question.  He was thrown up on a soda machine, arrested and detained and released without paperwork or explanation. This is not only wrong on so many levels but it makes the Ferguson Police force look very bad.

President Obama during a press conference today addressed the situation going on in Ferguson, Missouri. He stated that he has faith in the Governor of the state and assured the press that all the necessary steps would be taken to restore peace.

Another protester, a Howard University Graduate, Mya Aaten-White was reportedly shot in the head yesterday. She was covering the protests on her Instagram Page. Luckily she survived and is currently being hospitalized. I hope she gets well soon.

It is really sad to see this going on in 2014. Watching the images on the news made me feel like American has taken 50 steps back in race relations. My heart goes out to the family of Micheal Brown. I heard he was meant to start College this week. This is a life cut short, dreams killed, parental effort wasted and a family put in turmoil. It should never be this way.

2 thoughts on “Protest Intensifies in Ferguson, Missouri over Police Shooting of Teen”