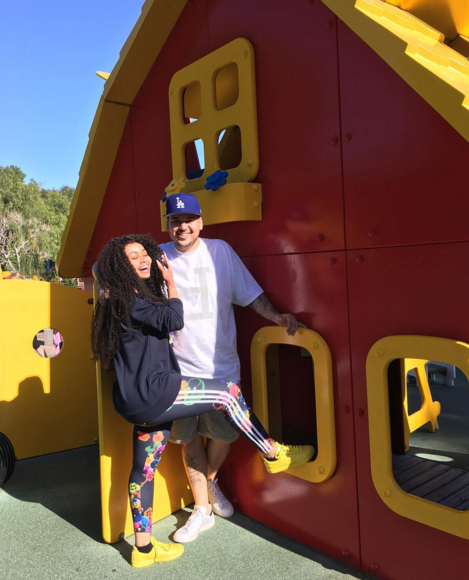 Call it love, call it companionship, call it friendship, whatever Rob Kardashian and Blac Chyna have going makes both of them happy and that is what truly matters. Sometimes, we end up finding love in the most unexpected places. I will be discussing their relationship and how their story can influence you into spreading your wings when looking for love. I will also explain why their story can give that person who has given up on love a little bit of hope.

Rob Kardashian and Blac Chyna (real name Angela Renee White) have obviously known each other for quite some time but who would have thought that something special was right under their noses. Rob and Chyna are somewhat family friends. Blac Chyna was a close associate of the Kardashian family up until their youngest sister Kylie started dating her then Fiancee and Son’s Father “Tyga” – who was also a close associate of the family. Lets just say after that Chyna and the female Kardashian family parted on a sour note.

Months went by with Tyga and Kylie’s relationship blossoming while Blac Chyna remained single. I can imagine how she must have felt watching those two flaunt their relationship when she was yet to have someone of her own. She kept herself busy and capitalized on her new-found fame while for the most part staying out of trouble. Her two known attempts at dating turned out not to be in her favor. The worst one being the news going around about a tatoo with the name Future on it and the Rapper coming out to disclaim any relationship with anyone.

During the start of this drama, something surprising happened that literally killed that story. One day the news was agog with rumors that Rob and Blac Cyhna were dating. What made this unique was that Rob is the brother to Kylie, who is Blac Chyna’s Son’s father’s girlfriend. Sounds complicated? Well, it depends on how you view it. A lot of people doubted the authenticity of the relationship. A lot criticized while most supported the duo.

I feel her relationship with Rob came at the perfect time because she was borderline about to be subjected to ridicule based on her alleged relation with Rapper Future. It was like oh here is Chyna again still looking for love and getting “unclaimed” while her ex is enjoying life with the same woman who “allegedly” caused their split. No one ever wants to feel that way.

Sometimes in life we reach and reach for what is not truly ours only to ignore what may just be. I personally believe if Tyga was hers, he would not have disappointed her so terribly. He has been documented many times standing up for his current girlfriend against his child’s mother. Where is the diplomacy you ask? Well, it has also been documented many times that Rob defends her so technically I think she lost one man and gained the better man for her. He is proud to show her off and is obviously smitten by her.

I follow both on snapchat and seeing them together makes me smile. This shows that the underdog can still be the winner He would not embarrass her every chance she gets.It also teaches us that no matter how bad things look in the love department, your story could change for the better overnight. In a matter of weeks, she want from trying to be someone’s woman to being the woman of someone who cares for her deeply.

I have to give Blac Chyna and Tyga credit though. They have done well co parenting their child King and keeping the drama between them away from his public profile. Meaning, we have never heard them fight about or over their child or the terms of caring for him. Their display of maturity in this aspect of their life should be applauded.

You see, sometimes those who disappoint us help lead us to our true path. You just need to keep your eyes open and see. Her disappointment (Her son’s father allegedly leaving her for a family friend) turned out to be a blessing in disguise.

Even though their (Chyna and Rob) situation may seem complicated, chances are with love and perseverance they will pull through because sometimes we end up finding our self where our greatest disappointment originated from. She found him when she needed it most and he found her when he needed it most. In my eyes they are both winning an even if the relationship doesn’t last a lifetime (we hope it does), they can take solace in knowing they enjoyed each other for as long as they couldand truth is, they look very happy and content with each other.

Life has no blueprint – never forget that.