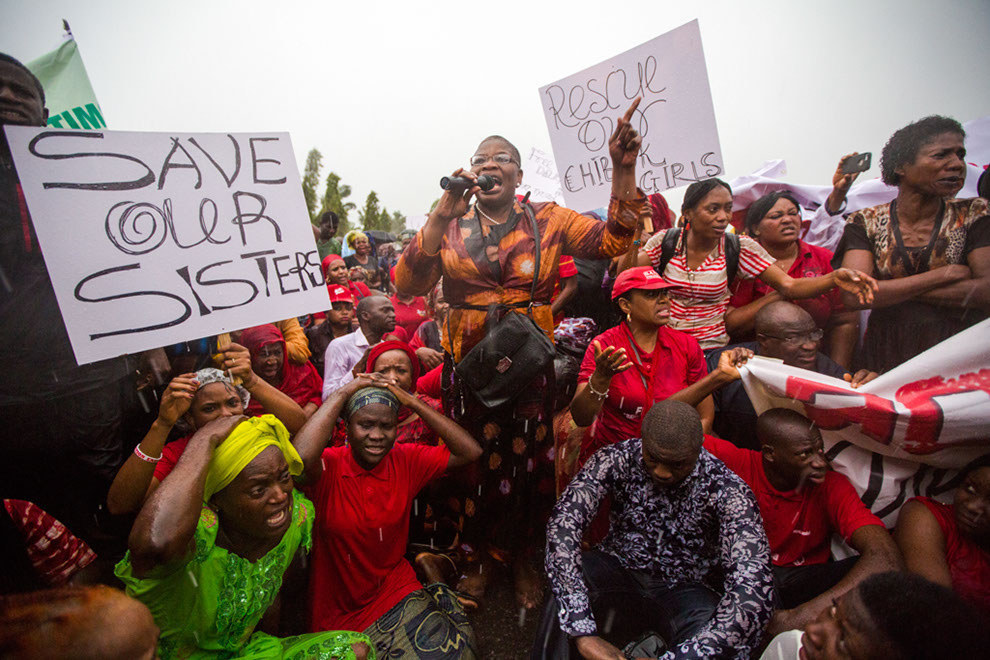 Stumbled on this article written/posted by Buzzfeed staff Jena Moore and found it quite interesting. It is a long read but well worth it. A lot of unanswered questions and missing links but most importantantly, all we want is for the missing girls to be found and brought home safe. Read the full article below. #BringBackOurGirls

At first, there was mostly silence. The girls were stolen from their school dormitory in Chibok, a rural village in northeastern Nigeria, in the middle of the night, by masked men with guns, and almost nobody noticed.
Then came the outcry.
The Nigerian military claimed it had rescued most of the girls, but the school’s principal said it was untrue. Parents cried for help, and then tried to take care of it themselves. Fathers rented okadas and rode the motorcycles into the Sambisa forest, where the girls were believed to be held by Boko Haram, an armed Islamic separatist group that terrorizes northeastern Nigeria. Mothers threatened to storm the forest on foot, hoping that “as mothers, we are in a better position to have the sympathy and concern over the fate of the missing girls” than, perhaps, fathers. The parents’ desperation became a national cause, and hundreds of women rallied in the capital of Abuja and the metropolis of Lagos, demanding that the government do more to bring back the girls.
Then — and still — there was confusion. Just how many girls were kidnapped? Just how many girls had escaped? Just who, exactly, are these girls?
They are simple questions without simple answers. Nigeria’s kidnapped schoolgirls were stolen three weeks ago, on April 16, but it was only in the early days of May, after national rallies and national and international press attention, that Nigeria’s political elite began to respond properly.
Now that the country’s highest politicians are trying to catch up to the crisis, the simplest questions have become political, and the identities of the kidnapped girls have become tools for blame-shifting, as the military blames local officials for bad information, the president blames the parents of the kidnapped girls for withholding information, and middling politicians try to get some time in the spotlight.

From the moment the girls were kidnapped, the response made it seem as if they were a problem Nigeria’s federal government didn’t want to deal with. For starters, no one knew exactly how many girls were missing. The first word from the government turned out to be untrue: The day after the kidnapping, the Nigerian military claimed to have rescued 107 of the girls. It said that 14 had escaped, and only 8 remained in captivity.
But the school principal, Asaba Kwambura, told the local media that the claim was a lie. “There is nothing in the military statement that is true about our abducted girls,” she said. The military formally retracted a claim that angered the girls’ parents and average Nigerians alike. “What kind of nonsense is this, for God’s sake?” one civil servant asked.
A few days later, after parents had counted among themselves, the number of missing girls was revised to 234. And this week, the police in Borno state, where the kidnapping took place, said the number was 328 — 54 of whom had escaped on their own, leaving 276 in the hands of Boko Haram. “The fact is that the number may likely change,” Borno state’s police commissioner, Tanko Lawan, said. Students from four other villages who’d come to take exams at Chibok, because going to school in their villages was too risky, and Lawan suspected their parents hadn’t yet connected any missing children to the April 15 kidnapping.
In confusion, apparently, is opportunity. As public outcry forced Nigeria’s political elite to engage the kidnapping, finger-pointing escalated.
In a presidential media chat, on Sunday, May 4, Jonathan insinuated that the parents of the kidnapped girls hadn’t cooperated with state or federal authorities’ efforts to rescue them. “What we request is maximum cooperation from the parents and the guardians of these girls,” he said.
Questions of identity also gave Jonathan’s wife, Patience, an opportunity to discredit the kidnapping story entirely. The same day the president held his presidential media chat, his wife met with the women leaders of the rallies that had put the kidnapping on the national agenda. Patience Jonathan bemoaned the kidnapping, publicly crying before television cameras that caught part of the meeting. But privately, she questioned the identity of one of the women who’d come to the meeting. Jonathan and a cabinet minister alleged that a woman had falsely represented herself as a mother of one of the kidnapped girls.
The woman, Naomi Mutah Nyadar (her name has been spelled with many variations in the national and international press), was arrested for that alleged misrepresentation after the meeting. When the police released her, they denied it had been an arrest at all, calling the detention an “interactive and fact-finding interview.” Among the facts the police claimed to have found was that Nyadar lived and worked in Abuja, as the deputy director of the National Directorate of Employment, a government agency.
But just days before, Nyadar had been speaking out publicly, leading a rally in Abuja, as a representative of the Kibaku Area Development Association (KADA), a development organization that was among the first to publicly demand action on behalf of the kidnapped girls.
“Our daughters were carried away by the insurgents like cows into the wilderness. If they are dead; we want to see their corpses,” she told one journalist at the rally.
Who Nyadar was — or who Patience Jonathan said she was — mattered. In the meeting, Jonathan used the story of Nyadar’s alleged impersonation to insinuate that the entire kidnapping was also a fraud.
“So my sisters, you can all see within them that they know what they are doing,” she said, implying a conspiracy among the Chibok mothers. “With what is happening now, will you believe that any children got missing?”
“No,” the women replied in chorus.
Jonathan continued, “So we, the Nigerian women, are saying that no child is missing in Borno State. If any child is missing, let the governor go and look for them.”

Patience Jonathan’s cloaked denial wasn’t the first. On April 30, Kema Chikwe, the National Women Leader of the Peoples Democratic Party — Jonathan’s party and the ruling party in Nigeria — publicly questioned the kidnapping, according to the investigative news network Sahara Reporters. At a prayer meeting at the party’s headquarters, she asked: “How did it happen? Who saw it happen? Who did not see it happen? Who is behind this?”
Chikwe later denied she cast doubt on the kidnapping, excoriating the news network for its “mysterious political interpretation,” and released a copy of her remarks. (Sahara Reporters told BuzzFeed that the printed remarks released the day after the speech and the Sahara Reporters’ article did not match Chikwe’s comments as delivered.)
The government of Borno state, in turn, excoriated Chikwe. In a statement, governor’s spokesman Isa Gusau said Chikwe was undermining the efforts of the president, who had called a national security council meeting and later would set up a presidential committee to investigate what happened in Chibok and how best to rescue the girls. And as proof, he offered Chiwke a list of the girls’ names.
“[T]he Borno State Government has a comprehensive data that includes pictures of the missing students and those that returned, which the Government is ready to publish on Friday, May 2, 2014 if the Defence Headquarters which has since been managing information on counter-insurgency operations in the Northeast, gives the go ahead,” Gusau said in a statement on April 30.
But the defense ministry did not give the go-ahead. Instead, it dumped all communications about the matter on the Borno State government — until today, when the military announced, that it would give a 50 million naira, or about $300,000, reward for any information leading to the kidnapping, the same reward the Borno State governor announced more than two weeks ago.
Meanwhile, Borno police commissioner Lawan Tanko repeated Jonathan’s plea and the insinuation that parents might not be telling the truth. “We need the parents and guardians to come forward with genuine claims like names and photographs so that we can get the actual figure,” Lawan said.
The forum of state governors from the southeast on Sunday also joined the chorus of calls for a list of names, urging a public release of “the names and identities of the students … so that the whole nation would assist in the search.”
And then, on Sunday, May 5, a leading Nigerian evangelist simply came forward and released some names himself.
Matthew Owojaiye, the former chairman of the Northern States Christian Elders Forum and a member of the Christian Association of Nigeria, sent a list of 180 girls’ names to a major Nigerian newspaper; that paper, and most other major Nigerian outlets, published the names.
The names were disaggregated by religion, listing Christian and Muslim girls separately. It was also a partial list, though some local media interpreted the list as yet another revised figure for the total number of kidnapped girls.
The names were included at the end of a statement that said nothing about how the minister acquired the names, why he believed them to be accurate, or whether he was working with or speaking on behalf of the girls’ parents. The statement did, however, demand N50 million (about $300,000) in compensation for each girl’s trauma and suffering and scholarships for the girls to study abroad “by September 2014.”
The day after he publicized his list, Owojaiye all but retracted his statement. He called his comments “purely personal,” and said that the financial demands were only suggestions. “I have no wish to cause distress to the girls and their families,” he wrote in a statement.
But the names had already circulated widely. Most Nigerian newspapers had also published the list, and memorial art that incorporated the girls names quickly went viral, spreading across Twitter, under a hashtag whose utility critics have recently begun questioning.
But in the political fray of finger-pointing, and the international frenzy of “raising awareness,” no one seemed to have noticed perhaps the most important part the plea from the spokesman of the governor whose state the girls were kidnapped from:
“Our fear,” Gusau said in his April 30 statement, is that “to reveal names that would reveal religion and family backgrounds … could at the end, compromise the safety of these girls.” He also pointed out that publicizing the girls’ names could make it easier for Boko Haram to identify their parents and demand ransom, and he feared listing the names could undermine the rescue operation or simply become sensational.
And he was afraid that if any of the named girls managed to escape, or if Nigeria managed to rescue them, a public list would mark them for life.
“Abductions of girls are sometimes interpreted to mean automatic rape, [and] where the identity of these are revealed, they could be stigmatized even after being rescued,” he said.
Rescue may be looking more likely. The Nigerian military is sending four battalions to the region, and the United States Tuesday offered to send U.S. military and law enforcement personnel to assist in Nigeria’s operations.
But as Nigeria moves through the throes of blame-shifting, and the world increases its attention on a tiny village called Chibok, perhaps the easiest thing that everyone acting in the name of the kidnapped girls can do is simply not to name them.

What is your take on the issue? Should the girls names be released? Would it help the situation or not?