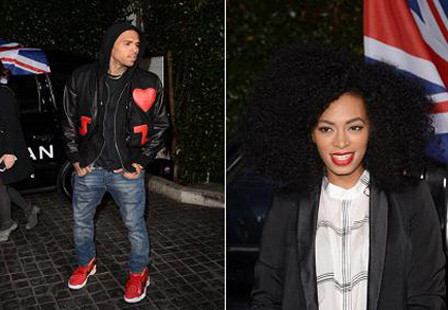 When the news of Solange attacking Jay Z broke and seeing the reactions to it, the one point I made severally was that there is/will be a double standard. So far I have not been proven wrong. I am always for the ladies and I will jump to defend any woman I feel is being wronged, so much so that I have been tagged a feminist severally. One thing I do not let my belief that women should be treated well delude me from however is, seeing something that is unfair and convincing myself that it is ok because a woman did it.

Apparently due to me being vocal on twitter about this, one of my followers sent me an  article written by Katie Gonzales.  I will share parts of the article I felt she wrote pretty much stating parts of what was in my head. Will Solange be charged? Why is it funny when it is a man getting abused? I always say, if you put hands on a man and he hits you back, do not complain, so it is always better to keep your hands to yourself. Now, do I think Rihanna hit Chris Brown 1st? Honestly? a part me says yes she did, but what we do not have, unlike JayZ and Solange is a video to prove it. If JayZ had hit her back would he have been seen as the bad guy? Would the media spin it to make him look bad? Chances are YES!.

POST YOU MAY LIKE: Congrats to Todd Tucker on his new show Hollywood Divas, Maybe now, Mama Joyce will Relax

Anyways, here is part of what Katie Gonzales wrote

But the #JayZSaidToSolange trend and all the others who have taken funny spins on what’s shaping up to be the entertainment story of 2014-so-far kind of miss the point. By creating (and consuming) memes and other humorous stories to take on the unsettling surveillance footage, we ignore that whatever the issue, Solange decided to take to physical blows as the way of confronting it.

And despite all the conspiracy theories, there is really no excuse for that, right?

Perhaps more troubling is how media outlets have chosen to spin the whole Solange attack. When Chris Brown hit Rihanna, we didn’t come up with clever hashtags speculating as to what Rihanna did to make Brown get so pissed off. We didn’t write LOL lists, because while funny, they would have minimized our repulsion to Brown’s actions, and in a way, blamed the victim.

Brown hit someone he allegedly loved, and that wasn’t OK. So instead of humorous talk show discussions or Internet gifs, we condemned him through serious news coverage, while domestic violence advocates let Rihanna know that she wasn’t alone and wasn’t at fault.

Now, I’m not advocating that someone call the hotline on behalf of Jay Z, because images of him getting counseling for sister-in-law abuse would probably seem pretty silly and spawn their own set of viral jokes.

But it’s an important double standard to be aware of: In one instance of violence, we quickly acknowledged that the abuser’s actions should be seen as totally unacceptable in our society. In the other example, we simply laughed it off.

These cases are similar in that both feature high-profile figures, but they’re obviously different in important ways. Of course, domestic violence is viewed differently when it is perpetrated by a man, someone who, in most cases, has power (and not to mention pounds) over the subject of his anger. Solange’s outburst is confusing because it’s a woman who lashes out with her fists, and she’s clearly trying to hurt someone much bigger who is way less fazed or injured by her kicks and hits.

But again, even if women are less likely to inflict serious injury, that doesn’t mean that physically violent actions can be condoned or justified as any less problematic when dealing with certain issues.

This whole incident highlights how we gender our acceptable responses to conflict, which is only exacerbated by the media’s discomfort with putting women in the role of aggressor.

Instead of turning her into a joke’s punchline, Solange should be seen as someone who needs to learn how to better confront her feelings and frustrations in a less drastic and harmful manner.

5 thoughts on “What makes Chris Brown and Solange Knowles Different? Do I smell Double Standard?”