Watch Episode 22 of Season 1 of the TV series REIGN. In this episode, when the King’s madness and cruelty reaches a fevered pitch, Mary and Francis take action. I did a spoiler post last week. In the Spoiler I wrote:

“In this episode, Pascal, the little boy that was rescued in the forest is off with Kenna in she and Bash’s new house while Sebastian and Nostradamus are out looking for “The Darkness”. The finally find the place they are looking for and boy was it gory. Stench of dead bodies, bones, writings on the walls. They knew they had found where the darkness does his dirty deeds. While looking around Bash saw a writing on the wall, a pagan poem which he had heard Pascal recite and it immediately clicked to him that Pascal and Kenna could be in danger and immediately hurries out to them. Meanwhile, while Kenna and Pascal were in the house, they heard silence, before you could say boo, here comes the darkness, he comes after Kenna and Pascal and she runs with him into the room and locks the door. He tries to break down the door to get to them and during this confrontation, the door is kicked in. OMG! ok let me just say, my adrenaline was rushing at this point because I thought the darkness was going to kill Kenna, but when the door swings open, it was Bash. Pheww. The Darkness and Bash got into a confrontation and Nostradamus (who just keeps getting hotter by the day lol) stabs the darkness from behind. He falls to the ground, and Bash asks to be left alone with him. Nostradamus takes Kenna and Pascal out of the room. Bash ends up killing the darkness but not before being told by the darkness that, Pascal is his successor and the sacrifices need to continue or else something bad will befall the land. Of course Bash doesn’t believe him so he exposes his face and finishes him off.”

You can read the rest of the spoiler here. 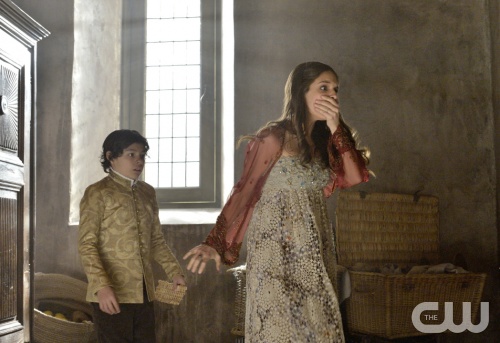 Reign Airs on CW every thursday at 9pm