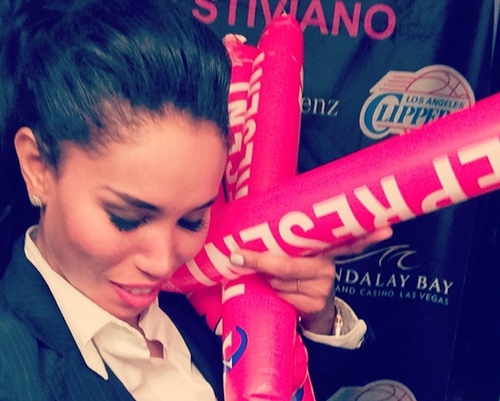 Oh the irony! The lady who allegedly leaked recordings of LA Clippers owner Donald Sterling making racist comments, V. Stiviano was attacked today in New York. This is coming a day after TMZ released video of her making racist remarks [you can watch the video below].  She has been claiming all along she should be a hero for exposing Sterling but she then gets exposed for doing the same thing he did. Amazing huh? Oh what a tangled web she weaves. Anyways, Stiviano’s lawyers, Mac Nehoray, confirmed today that she was assaulted around 7:00pm by two men outside the Gansevoort Hotel in Manhattan..

Remember in my last post about her, I had said that based on some comments I have seen about her, I felt that she is the most hated woman in America right now. So does this attack come as a surprise to me? The answer is NO. What I am surprised about is that with all the hate she has been receiving she did not beef up security around her. Maybe she can’t afford it seeing as her owning all those properties and cars are still pending? Well, her lawyer also said that she has been to the hospital after the attack and in his words she is “banged up but ok.”

I am not sure she fully comprehends the magnitude of emotions her actions has riled up in some people. Lets hope she recovers well and does beef up security. I mean yeah she isn’t a good person but at the same time, no on should be tryna hurt her. That’s just not right.
WATCH VIDEO of V Stiviano Macking Racist comments and mocking black people

2 thoughts on “V.Stiviano Attacked In New York 1 Day After Video of Her Making Racist Comments Leaked”