Do yall remember when Rapper The Game beat up G-Unit Rapper 40 Glocc with one hand while recording with his iPhone4? If you don’t I have the video for you below. By the way, If you watch the video, you will feel me when I say 40 Glocc does not deserve that name at all, he should change his name to Prancy Toes. hehehe! When The Game was asked why he beat the rapper up he also pointed out the fact that the guys persona doesn’t fit the name. He said

LMAO! I agree! He continued on to talk about what started the beef in the first place. Game said;

“He, for some reason, one day, woke up and brushed his teeth and felt like he wanted to say something about me,” says Game about how the alleged beef started. Game claims he was tired of 40 Glocc always showing up uninvited to music video shoots and harassing people, but when 40 Glocc made a Twitter page in the alias of Game’s young son, that was the last straw.

“You can do whatever you want to me: rap about me; you can shoot me; kill me; stab me; it doesn’t matter. You talk about my kids, that’s when it gets really real,”

I whooped his ass & recorded it on my iphone 4….. I’m tryna catch em before the iPhone 6 come out so I can whoop his ass wit every version 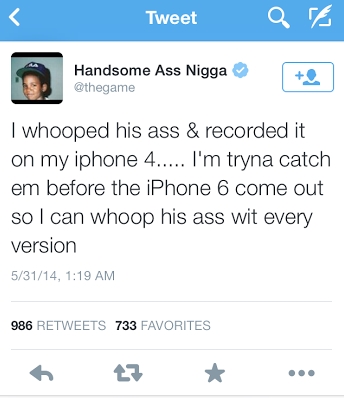 CHECK THE VIDEO: The Game beats up 40 Glocc while holding his phone

2 thoughts on “Tweet of the Day; Rapper “The Game” revisits beating up 40 Glocc”