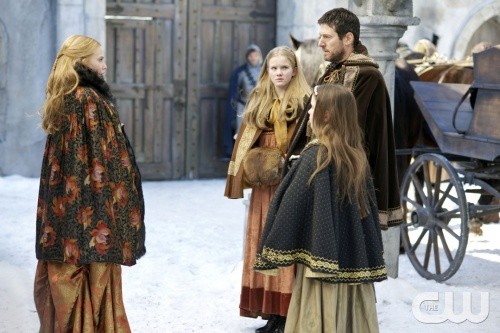 If you are an avid fan of the CW TV series Reign, like I am, then you want to stayed glued to this. Each episode just keeps getting hotter, the twists, the turns, the plot has my adrenaline at top speed while watching. In Episode 19 titled “Toy Soldiers”  it seems like a whole lot happened in just one episode, I couldn’t even catch a break because I did not want to miss a thing.

In summery,  Mary was released from the dungeon after being kept there by Francis for wanting to leave to Scotland to help save her mom and country. Remember Mary’s half brother was allegedly plotting to have her killed? Well I guess that storm passed because this episode started with Mary and her ladies having fun in the snow garden.

So remember the disgraced kitchen maid, Penelope? Well she came back with some hogwash story about being pregnant for King Henry. Trust Catherine De Medici to intervene on time and shut down her plans. She eventually gets caught in the pantry with one of their kitchen hands trying to “make a baby” hahaha. Very ambitious girl if you ask me, and guess who caught her? Catherine! She has her thrown in the dungeon and pretty much shows her who is boss. Now, the twist in the story was Catherine eventually offers Penelope a job to be part of her Flying Squad (you know those ladies she trains to get information she needs). I guess birds of the same feather “fly” together. lol.

So guess who finally consummated their marriage? Yes, it was Bash and Kenna. Ok this is the part where I say, Bash is a total romantic STUD!. He told Kenna he wanted the night to be so memorable she would forget anyone else she has ever been with and he went out of his way to you know the rest.lol. Now the only odd part about their consummation was he was motivated to take it all the way when he saw Francis and Mary kissing so I guess it is safe to say Bash isn’t completely over Mary yet. It just baffles me how they are able to move on to the next person so fast and be so uber romantic you would think they have been together for years. Well, Mary or not, Kenna and Bash are looking like an awesome match.

We know King Henry is going mad but he took his madness overboard when he took it upon himself to go to war simply because the Queen of England gave the crown he wanted so badly to someone else (not Mary Stuart) and he wasn’t happy about it. In the midst of all this, Scotland is in trouble and Mary had to call on her Uncle for support to go to Scotland and save her mom but because of the war King Henry started, Francis had to divert the army Mary needed to go and fight for France. This did not make Mary happy and of course they had that whole “my country, your country first” argument they always seem to have. oh! guess who is going to war with the soilders? Francis!. The episode ended with him marching off with their army and Mary implying she would have to save her country herself even though she doesn’t know how she will go about it. Drama! lol

Oh lastly, guess who kissed the man who had been longing for her? Greer! Yes she finally gave that sweet old man some sugar. It was so cute and romantic too. Had me awwing the entire time. He even told her dad he wasn’t interested in her dowry and all he wanted was her. Gosh! he is just sooo charming, sweet and so caring. I am so rooting for them and I hope the writers will not write anything that will tear them apart. We already have enough drama with the other couples. Anyways if you have not watched the episode, you can do so here. Seeing it visually is even more exciting and trust that I can’t wait till next Thursday for a new episode. So if you haven’t yet, keep my website book marked because next week  ill be bringing you gist from Episode 20